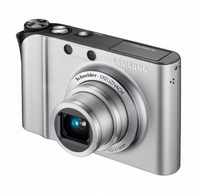 Although all bar one person missed out on being shot into space with a couple of Samsung NV cameras (something Gary was clearly not happy about when he reported it back in April), we can at least get a fairly decent deal on cinema outings for the next year courtesy of the company to put the first Korean digital camera in space.

Don’t rush out and buy a camera from the NV Series this week, though, as the offer runs from 13th October until 31st December 2008 only.

Pick up an NV24HD, or a pink NV4, or perhaps an NV100 or NV9, and they can then get a cinema pass entitling them to two-for-one tickets for a whole year.

It does involve a bit of faffing around with forms and the like, but if you were thinking of buying one of Samsung’s compact cameras in the next couple of months anyway, it’s not a bad deal.