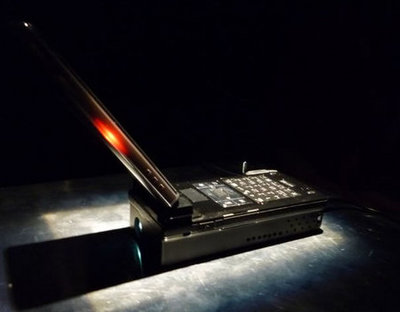 Japan’s NTT DoCoMo has taken up one step further towards the future and are developing a phone that comes with a built-in projector. Though still in the prototyping stage, this is the sort of thing we could be seeing in phones in three years time.

The projector itself, which has been bolted to a current mobile phone in the above picture, uses a small digital light processing Pico chipset and a digital micro-mirror device to pack in a device that only a few years ago was the size of a microwave into such a small space, and can display an image at HVGA size (480×320) – not massive, but a decent start, and it has a luminance of 7.5lm.

The reason these little projectors aren’t being mass-produced yet, and the reason our phones don’t act like R2D2 during video calls yet is because they need to invent stuff that will bring the rest of the phone up to scratch. Projecting an image consumes an awful lot of power – somewhere in the region of 3W, and so you’ll only get 15 – 20 minutes of projection before your phone battery dies, not to mention the heat projectors can generate.