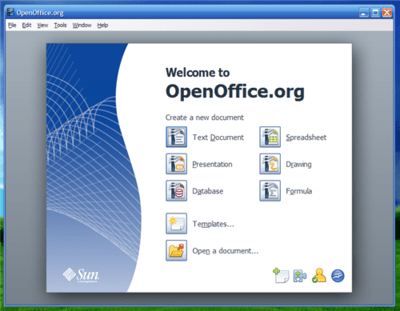 What’s your favourite open-source Microsoft Office alternative? Yay! I love OpenOffice too! Let’s be friends, and throw a party, because version 3.0 has just been released. In the new version: native Mac OS X compatibility, support for version 1.2 of the OpenDocument format, and compatibility with Microsoft’s OOXML format.

The latter feature is particularly useful, given that Office 2007 saves .docx files by default – something that’s confused many a hapless user as they tried to send stuff to people using older versions of the office suite.

OpenOffice 3.0 also features a bunch of usability and interface improvements. There’s a new icon set, a slider for zooming into the page and a new launcher interface, among other things.

Older versions of the software were a little buggy, and not quite ready for primetime. Users have certainly had difficulty with it in the past. Dan, sitting next to me, suggests that it would be better if the program were either less like MS Office, or identical to MS Office. The current incarnation is too similar without being the same, so users are misled into trying to do things the way they would in the Microsoft software.

Of course, the big advantage of OpenOffice is that it’s absolutely, completely, and utterly free. At the time of writing, MS Office 2007 costs £100 or so new, and that’s the “Home and Student” edition. Although you’ll almost certainly get £100 of value out of it over the long term, you’ll definitely get £0 of value out of OpenOffice.

If you can get near the site, that is. Currently, it’s dead to me, presumably due to the weight of journalists linking there. Try the link below in a few hours.