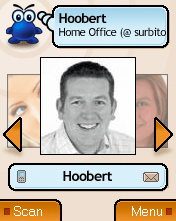 A new bluetooth-based social networking application has launched today and looks set to rival “actually talking to people”, which is the older, more established method of social networking with those within a 10 metre radius.

“Bluehoo” is an application that will run on mobile phones and Windows Mobile and will scan for other users who are also running the application – who they insist on referring to as “hoos” – over bluetooth. Apparently when you find someone else you’ll be able to view their profile and stuff.

Apparently the network already has 120,000 users, with the best chance of finding others being just outside the Bluehoo offices.

What makes this more interesting than just another “new social network” story is that it is apparently the first commercial application backed by Windows Azure, a “web operating system”, that aids “cloud computing” and will stop Microsoft going bust as soon as the internet starts serving up all of our computing needs.

Check out Bluehoo here or download the mobile client at m.bluehoo.com.

One thought on “Bluetooth social network allows the shy to ask "so do u come here often?"”