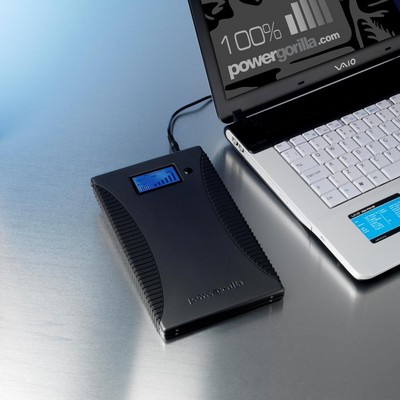 Powergorilla is a brilliantly named product from Powertraveller. It’s basically a big ol’ battery, which you plug your laptop into, and it’ll charge your laptop’s onboard battery for you. A fully charged Powergorilla will give you two to six extra hours of laptop battery.

It also works with mobile phones, MP3 players, portable games consoles, and many other battery-based devices. Powertraveller reckon you’ll be able to eke over twenty hours extra usage time out of your gadgets than you otherwise would have.

The device comes with a switch to swap between 16V, 19V and 24V laptops, as well as 15 different connectors for the most common laptops and other devices. You can probably bet therefore that it’ll have Dell, HP, Apple Powerbook, iPod, USB, DS and Nokia connectors, among others.

The Powergorilla weighs 631g and measures 22cm x 13cm x 1.5cm. That’s about the size of a large AC adaptor, or a Zip drive (remember them?). The Solargorilla is slightly bigger and heavier, and is also covered in rubber, which means it’ll be moderately waterproof and shockproof.

There’s no pricing or availability info yet, but as soon as we hear from the company involved, we’ll pass that info straight on to you.