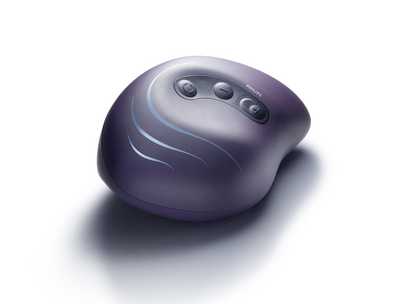 It’s easy to write a smutty piece about marital aids, just ask Gary. He lives for it. I, on the other hand, take an altogether more serious and adult approach to intercourse as, I’m glad to say, do Philips who yesterday launched their very first items designed to heighten copulation.

The Dual Intimate Massager is the first of these and it comes in a smooth, round case which opens up to reveal a his and hers set of vibrating shapes designed to stimulate the contours of his penis and the, oh sod it. I can’t do this seriously any more. It was going fine until I used the word “copulation” and by the time I got to “shaft of the penis” I didn’t stand a chance.

Basically, Philips wanted to come up with toys that both partners can use at the same time rather than something that the woman’s really going to get off on, to the point where she divorces her partner and marries her new wonder gadget. Let’s face it, it’s probably happened.

As such, Philips claims it’s invented the first non-penetrative device designed for both partners. Now, I don’t particularly want to get into a discussion about the use of cock rings and remote control vibrating clamps and whatnot, but I’ve a feeling there’s a degree of non-penetration with them too. All the same, it may be the package made for two that’s what makes the Intimate Massagers unique and, as it goes, yes, I could see me and my girlfriend having quite a giggle with them.

It runs with four different vibrate modes and can be used in the bath or shower, with oil and other lubricants and, presumably, Vaseline, chocolate spread, peanut butter (crunchy, smooth and organic), shoe polish and whatever other kinds of pastes and liquids that float your boat.

The final offering from the Dutch tech giants is some LED candles. See, it doesn’t all have to bums. Romance does exist, even if it is a little on the tacky side.

I’ve got to say, that it’s quite a bold move from Philips and they seem to have conducted the whole affair with a lot more dignity than I could ever muster. I suppose the writing was on the wall though. It’s a short way from TVs, to lights and coffee machines and then, before you know it, you’re rubbing up around in peoples sweaty bits. It’s a hard life.