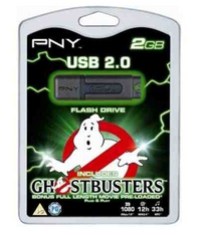 If there’s something strange, in the neighborhood, who are you going to call? Failing the ambulance, the fire brigade and the police, your best bet is probably the fourth emergency service, the Ghostbusters (lets face it, mountain rescue and the coast guard are, if anything, less valid than the Ghostbusters, especially in inland urban areas).

So it’s a little odd that despite the abundance of cop films, hospital dramas and, er, London’s Burning, that there are only two films and a couple of spin-off TV series about the Ghostbusters. There is a silver lining to this travesty, though: the latter is almost ubiquitously available. Now not only can you own Ghostbusters on DVD and, presumably, internet download and Blu-ray, but Argos are selling the first film, bizarrely, on a USB memory stick.

Disappointingly, the stick itself, despite coming in packaging featuring a big Ghostbusters logo, is not actually themed to look like anything from the films… odd when the long white car would be the perfect shape to contain flash memory. There’s also no indication as to whether or not the film on the stick is laced with DRM, so it’s currently unknown as to whether you’d be able to copy it to your iPod to watch on the train… and I’m not willing to splash out on the twenty-nine pounds and ninety-nine pence (really – that’s how much it costs, that’s why I wrote it in full to prove that I haven’t made a typo) in order to find out.

One thought on “Ghostbusters busts ghosts, maybe kicks off a new format war?”