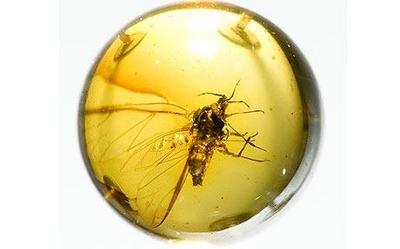 No, not that kind of bug. A previously-undiscovered type of Aphid, encased in amber, has been found after a scientist bid £20 for a paperweight on the popular online auction website eBay.

The insect has been named Mindarus harringtoni, after the purchaser, Dr Richard Harrington. After he couldn’t identify what it was himself, he sent it off to an expert in Denmark for identification. The expert confirmed that it was from a previously unknown species.

Dr Harrington wanted to call the new species Mindarus ebayi. “Unfortunately using flippant names to describe new species is rather frowned upon these days.” said Dr Harrington. It’s unknown whether the next step will be to extract dinosaur DNA and clone dinosaurs, releasing them on a remote island.