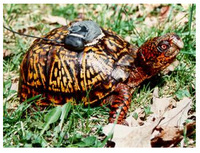 A keen marijuana user hit upon the great idea of using some off-the-track American park land to grow himself a few special plants.

In these environmentally worrisome times, you’d think he’d be applauded – but no. When a box turtle equipped with a GPS tracking device stumbled into his little outdoor hydroponics lab, the park ranger followed, found his stash and grassed the amateur gardener up to The Law. The Law then staked out the exotic vegetable patch and arrested the guy, who would’ve gotten away with it if it wasn’t for that meddling reptile.

The culprit is believed to be Isiah Johnson, who is fortunate enough to live in a place called Chevy Chase. Sergeant Robert Lachance of the U.S. Park Police said “He felt like he had a layer of security, but he probably never counted on a turtle with a tracking device leading us to that location and finding the field.”

No. You’d never count on that. Even the most meticulously-planned crimes in history have not made allowances for what would happen if a GPS-enabled turtle stumbled into the crime scene. No one would ever commit any crimes if they had to go into that level of detail during the planning stages.