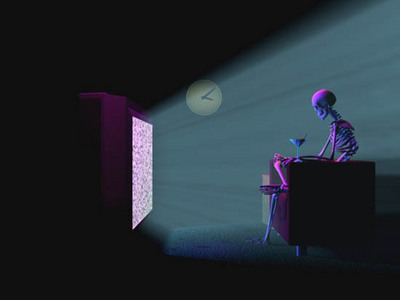 Sit comfortably one and all while I tell you a tale so spine chilling it will, er, chill your spine. Croatian police have discovered the body of a woman who died in front of her television set in Zagreb. She had been missing for 42 years.

Hedviga Golik sat down in front of her favourite show in 1966 with a cup of tea and never move again until officers broke down her door to find out if anyone still lived in what had been considered an abandoned apartment. She was 42 when she died.

“When officers went there, they said it was like stepping into a place frozen in time,” said a police spokesman.

“The cup she had been drinking tea from was still on a table next to the chair she had been sitting in and the house was full of things no one had seen for decades. Nothing had been disturbed for decades, even though there were more than a few cobwebs in there.”

So, 1966, what kind of gadgets we’re in her room and is there any chance the tea’s not too cold to drink. Perhaps that’s a faux pas, dead man’s tea?