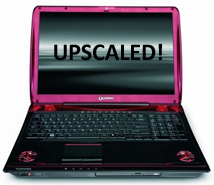 Early June a rumour emerged that Toshiba would be launching a new attack on Sony, via the magic of new ‘upscaling’ technology. Of course, this is nothing new, with Toshiba themselves working on similar products for “some considerable years, at least 3-5 years”, with DVD players, TVs and now laptops containing the upscaling chips, plus with their ‘Super-resolution’ imagery where SD-content is upscaled via an interpolation algorithm to 1080p.

However, today at a London event, Toshiba formally announced upscaling would be their next plan of attack on Sony, claiming they would be focussing on “taking standard content, and displaying in HD format”. This technology, upscaling standard definition content, such as a DVD, to a higher resolution, has long been controversial for not even comparing to the real high-def experience that comes via Blu-ray, or HD DVD.

Toshiba explained to the assembled press at today’s event that their technology would “add resolution”, and “fill in the gaps”, providing stronger colours and clarity where it was missing. They showed two TVs both displaying the same content, one at standard definition, and one using their upscaling device, and whilst the latter did look more impressive, it would pale in comparison if shown next to a true HD source. Which Toshiba obviously didn’t do, as they’re no longer endorsing HD DVD and will never support Blu-ray.

After receiving some far from publishable questions and insults from the assembled journalists (“fanciful nonsense” was one of the kinder remarks from a journalist during the Q&A session), the representatives, including Emily Shirley, Head of Product Marketing at Toshiba Europe were obviously getting irate. “Blu-ray is only a storage medium”, they retorted, explaining it was not the only way to view high-def content on your TV.

Digital downloads are proving to be a lucrative business for all concerned, particularly Microsoft, and it was obvious from today’s meeting that Toshiba will be supporting that side of the new format war for the foreseeable future. “The fact that Bill Gates and everyone in the industry is talking about downloads is illustrious”, one of the panel members responded with, when asked about the worth of downloads in comparison to Blu-ray, however they hastened to add “we’re not necessarily saying anything negative about Blu-ray”.

It’s unclear as to what products Toshiba will be launching in the next few months with the upscaling chip, however the Qosmio laptops announced today all feature the technology. All eyes will be on the IFA technology show on August 20th in Berlin, where Toshiba is expected to introduce their new Blu-ray ‘killer’.