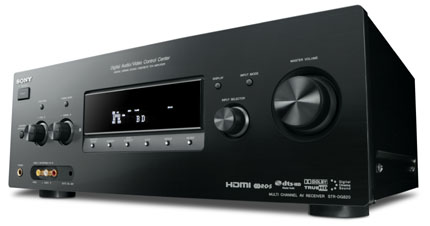 The STR-DG720 also offers 1080p/24 high definition and 7x100W output, but with a slightly reduced feature set, while the STR-DG520 has many of the same features as its big brothers, but is a 5.1-channel system offering 100W output.

Digital Cinema Auto Calibration ensures that the system is set up for optimal audio performance, regardless of how speakers are placed and the acoustics of the room.

Finally, as it’s Sony, the receivers feature BRAVIA Sync, and there’s also a Digital Media Port allowing other accessories to be added, such as Walkman and iPod players, and Bluetooth and Wi-Fi adapters.

All available now, prices to be confirmed.