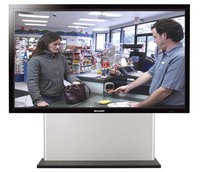 The Sharp LB-1085 – which we first revealed back in our coverage of CES 2007 – will be buyable in Japan this July. Theoretically buyable, should you be in Japan and have a van big enough to get it home from whatever the Japanese equivalent of Currys Digital is called.

It does the full 1080 HD, obviously, plus there are three HDMI sockets and… you can probably guess. Everything. It costs £50k. It obviously has everything and every sort of hole you could ever need. The polar bears won’t be very happy with you for buying one, though – this monster consumes 1130 Watts when in use.