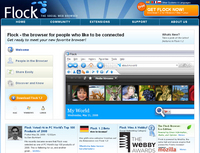 The Mozilla code-based browser Flock has picked up the prize for Best Social Networking at the 12th annual Webby Awards.

The California-based company, whose software aggregates all of the user’s social networking needs, beat the likes of Bebo and Facebook with its understanding of the fact that people find it hard to keep track of all their web 2.0 sites at once.

It runs on the same business model as Firefox with revenue coming from Yahoo as the browser’s default search engine and even automatically picks up your RSS feeds for you.

So far, its only issues are that it has no instant messenger aggregation and is as yet to get on board both MySpace and Bebo but if you’re about to turn your nose up at it, as I was, it may be worth noting that it will include all of Firefox 3’s wonderful new features when Flock 2.0 comes out.

If you love your social networking, I’d take a gander.