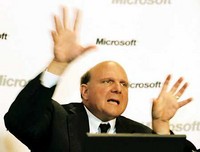 Microsoft CEO Stevie Ballmer is having to wave his arms about a bit to get the world’s attention and explain that Microsoft is not about to take over the internet. Oh really?

There was speculation that the Windows giant would make a move for Facebook, of which it already owns a stake, and AOL along with a list of other smaller companies, having failed in its bit to bag Yahoo!.

“People don’t understand what they’re talking about,” said Ballmer and presumably he wasn’t referring to himself. “At the end of the day, this is about the ad platform. This is not about just any one of the applications.”

Although talks with Yahoo! collapsed last week, Microsoft has left the door open in hopes of expanding their advertising potential.

To complete a rather frustrating day for the company, they have also had to issue a warning to users of Windows XP who’ve downloaded security patches for Service Packs 2 and 3 which haven’t fixed the very problem that they were supposed to. Users are advised to reinstall patch MS08-030 and, as for the cause of the situation, all they have said is:

“We’re just starting this investigation, but early on, it appears that there may have been two separate human issues involved. When we’re done with our investigation, we’ll take steps to better prevent it in the future.” Glad to hear it.