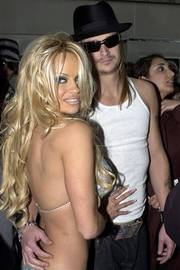 Oh dear. In what can only be described as a MASSIVE PR BLUNDER, Kid Rock has told his fans not to bother buying his music and to steal it off the internet instead.

His record label is going to love that.

Kid told the BBC “Download it illegally, I don’t care. I want you to hear my music so I can play live.” Mr Rock is angry that iTunes doesn’t pay as much in royalty rates as traditional media, basically, so he’s trying to keep his music off Apple’s system for as long as possible.

He added “I don’t mind people stealing my music, that’s fine. But I think they should steal everything,” before going off into some crazed rant about oil companies.

To be fair, the thought of actually paying for Kid Rock’s music has never crossed our minds. So we’re 100% behind him on this campaign. Long may his output remain inaccessible.