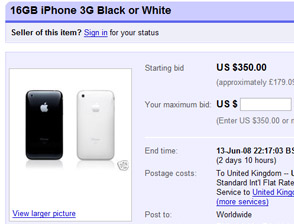 The iPhone 3G was announced just 36 hours ago, but already eBay has several auctions for people who can’t be bothered waiting in line on July 11th. At the time of writing, there are eight auctions worldwide, with prices ranging from US$350 to £500 (around US$1,000) for the 16GB version.

Each seller promises the handset will be sent to the winning bidder after July 11th, and will come unlocked, which is still an illegal act. Stories have been spreading of Carphone Warehouse and O2 requiring you to sign a contract before you buy an iPhone, instead of signing up for one at home, which looks like it could decrease the amount of jailbroken phones. However, it’s believed iPhones bought on PAYG, or from the Apple stores, need not require a contract signed there and then, meaning you could still jailbreak one technically.

You’d be hard pressed to find a first generation iPhone anywhere at the moment, however eBay is doing a brisk trade in second-hand and brand new phones. There are just under a thousand auctions today, with phones ending in the next hour selling for around £260. You’d think people would’ve heard a new iPhone had been announced by now…