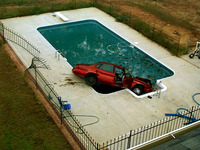 Dipping is, apparently, the HOT NEW TREND among spoilt rich kids who live in the sort of areas where the neighbours all have swimming pools.

The Telegraph reports that youths – no doubt off their heads on alcopops and Skittles – have taken to tracking down nearby swimming pools on Google Earth, then organising midnight swim-meets in them with friends through crime-enabler Facebook.

Basically, some residents have reported finding their swimming pools full of beer cans in the morning and decided to blame the internet for it.

“We are advising owners of swimming pools to be on their guard and extra vigilant,” said A Man From The Police. “We would also warn prospective swimmers that using someone else’s pool is trespassing and therefore illegal.”