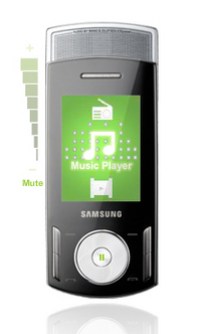 It’s interesting to see how the different phone brands are going about keeping up with the Jobs’s as computers become mobiles and mobiles computers. Whereas Nokia has decided to go down the gaming route with N-Gage, it seems Samsung has decided that music will be their thing and has announced a competition to go with the launch of their F400 handset.

The idea behind F400 Share is that unsigned bands are encouraged to upload one of their tracks to the Samsung website where they can be listen to and voted on the public. Sound familiar? Four super lucky special winning bands then get used for the F400’s various advertising campaigns over the internet and radio with sod all in the way of royalties for all eternity.

I’m getting really pissed off with this kind of thing. Companies are sucking the creative public dry for this holy grail of “original user-generated content”. Yes user-generated content is what it’s all about. That’s web 2.0 and it’s what the public like to do for their own pleasure but it’s one thing to blog, write songs or create any kind of art for free because you love it but why on Earth should corporations expect to be able to not pay you and use it for their own financial gain?

Samsung and all the others that do this kind of “competition” should get up off their arses and make their own campaign music or at least have the decency to pay someone to do it, and if they really must do this kind of contest then at least make the prize worth while. Put your hands in your pockets and pay these guys some proper winnings or a recording contract. It really makes me sick and it’s a shame because I think the F400 looks like a pretty good phone too.