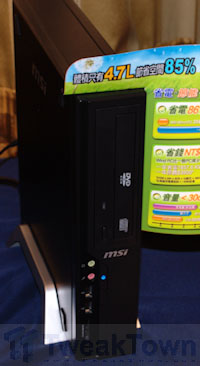 Anything Asus can do, we an do better. That’s the new company motto at MSI who has just announced a new sub-desktop computer, the Wind PC, at Computex in Tapei.

The Wind PC comes with 1GB RAM, 160GB of hard disk space and a DVD combo drive but the main area of excitement is the 1.6GHz Atom CPU which helps it consume 86% less electricity than ordinary desktop PCs, and that should amount to just 35W (30mW in idle mode).

This is all part of MSI’s horribly named campaign, “Ecolution”, which combines “eco-friendly” and “environment evolution” and sound like the same thing to me.

No word as yet to what operating system on the 6.1 cm thick machine is going to have on it but, chances are, just like the Asus Ebox, it’ll be Linux, and rightly so. The Wind PC is capable of playback at 720p resolution but isn’t powerful enough for 1080p.

It’ll be available in Taiwan for NT$3900, which equates to about US$129, but with the Ebox reported at US$300 in the West, I wouldn’t expect such generosity over here.