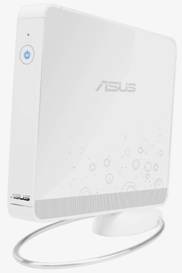 Remember the rumours regarding a desktop PC version of the ASUS Eee? Finally, some more concrete evidence has landed in our RSS feeds, albeit with the same mocked-up images as before.

Just like their Eee, it’ll be a budget sub-desktop PC, with just 2GB of memory and a 160GB hard drive. They’ve given it a catchy name and everything – the Ebox. Think dyslexics will have a tough time discerning between the Ebox and Xbox? Me too.

The Register is claiming the Ebox will run on Linux, although my bet is they’ll add an XP version a few months after the launch. Also available in black, it will be officially confirmed by ASUS on the 3rd of June at Computex in Taipei, and retail for under $300 reportedly.