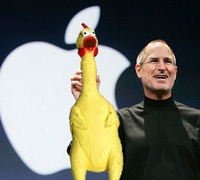 Because every Apple fan and gadget fashionista will automatically buy it anyway. As long as it’s sleek and expensive enough to brag about on the internet.

Even if Mr Jobs pulls a solar-powered calculator (iAddsUP) out of his shirt pocket and announces it goes on sale – tomorrow! – for a mere $699 for the 8-digit screened version and $799 for the 10-digit screened model, it’ll be a smash.

Apple fans will now buy anything from Apple. Not only that, but Apple’s become some sort of global fashion icon. People just have to have its new stuff, regardless of if it actually fills a gap in their lives or not. It’s a far cry from the Apple of the 1980s.

Perhaps it’s the product placement that’s turned most Hollywood blockbusters into 90-minute adverts for MacBook Pros, or maybe it’s the fashionable white? Whatever the reason, it’s now impossible to criticise Apple products, what with the rabid love they inspire in people.

I don’t get it. I quite like Apple stuff. I understand why someone would feel good about owning a MacBook Air, for example. The feeling of superiority that comes from popping open that silver blade is immense. MacBook Pros are awesome. The iPhone works like they promised and I’d very much like to have one, please.

All I’m asking for is a little objectivity, that’s all.

If Apple shows off a handheld games machine at WWDC in June, I’d like to see headlines saying “Why is Apple doing this?” instead of “WOW! Apple iGAME will KILL Nintendo!”

Equally, if Apple goes down the tablet computer route, hopefully everyone on the internet will ask how this time is going to be different from all the other times companies have attempted to force us down the tablet/PDA route, and put forward some reason why Apple might be the first company to actually make a success out it, instead of saying “EEE PC DEAD! APPLE SETS NEW BAR FOR MOBILE COMPUTING!!”

Just saying that Apple’s really cool right now and therefore any new product it releases will be awesome and a huge a success isn’t enough.

I know these are pipe dreams and that the minutes, hours, days and weeks after Steve’s speech at Apple’s WWDC will be filled with breathless hyperbole about how Apple has changed the world with its latest product and endless unboxing videos and photoshoots, but you never know.

One day it’d be nice to see Apple not just getting away with everything because it happens to have become cool.