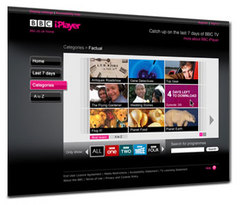 The extraordinary demand for the BBC’s iPlayer service appears to be reaching a plateau, at least for now, if one ISP’s usage statistics are anything to go by.

PlusNet has been monitoring the effect of its customers streaming content from the BBC iPlayer, and has seen modest percentage rises in usage since March. February’s figures were up 25% over January, but March was around 6.6% higher than February, and April just 3.2% over March.

Evenings are the most popular times for shows to be streamed, and in particular between 9 and 10pm. It’s worth noting that PlusNet appears to be looking at all forms of streaming media, not just from the BBC, as it states “streaming now accounts for more than 10% of downloads on some of our products, when 6 months ago it was around 5%. A big chunk of that usage shift (in percentage terms and in actual usage per customer) is coming from P2P and Usenet.”

Though the popularity of these services appears to stabilised somewhat, it’s likely that new services (such as ITV’s download service), higher quality video, and more popular programmes, will continue to bring in more users.