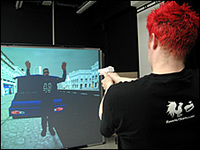 Police could be taught the differences between good (don’t shoot!) and evil (shoot!) thanks to a new video game created by boffins at Abertay University. The game have been given the superbly functional and utilitarian name of Shoot/No Shoot.

It uses your standard video game light gun. Cops “playing” the experience approach a man who’s fiddling about in his car boot. He then turns to face the camera and… what do you do? Shoot first? Incapacitate him with a bullet to the knee? Go for a safe takedown shot into his chest cavity? Headshot, like in Halo?

What you’re supposed to do is watch him for signs, see what he’s up to. He’ll even respond to warning shots deliberately designed to miss, is capable of running and listening to verbal warnings. He’s dead clever for a computer man.

The project is currently just a design concept by a bunch of students. That headline of mine up there was quite was misleading. The only thing poor cops can play while on duty are abysmal mobile phone games.