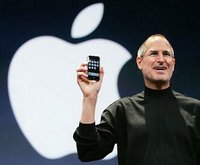 American exclusive iPhone supplier AT&T has given the world its iPhone Rumour of the Day today, thanks to an internal email.

The phone company has asked its employees not to book any holiday between the dates of June 15 and July 12 – presumably, as the blogosphere is now presenting as 100% confirmation, because the 3G iPhone is indeed coming in June and it’s going to be ALL HANDS TO THE DECK to cope with the rush. The full internal email can be found over at The Boy Genius Report.

Obviously AT&T is an American company, in America, for Americans, by Americans – so don’t go expecting a 3G iPhone to pop out over here in June as well. Although, seeing as we’re much more 3G ready than the States, it really ought to be a simultaneous launch this time, especially now all the old stock has been cleared…