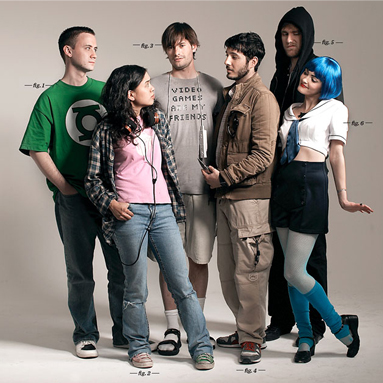 Brought to my attention by Gizmodo, I am simply appalled by this feature Wired has published not just online, but in their latest issue, too. As a longtime fan of Wired magazine, reading it for over four years now, I’m shocked at how they could misrepresent and alienate their core readership in a blatant attempt at linkbaiting.

Is anyone else getting fed up with how the mainstream public has opened their arms to the big ‘G’ word, and any old internet-user with a Mac or a penchant for shopping at Threadless describes themselves as one? Do you think any of the American Apparel models stereotypes in the picture above, courtesy of Wired, got ostracised in school for spending every lunchtime in the library, reading X-Files books, and preferred racing home to play PC games instead of partaking in after-school basketball lessons? Doubt it.

As a commenter on the piece over at Wired asks, ‘has Wired so little cred and touch with the real examples they are writing about that they couldn’t round up a few from their interns/work experience crew? Or is it they fear that once they read the BS tagged to them they would go on a lynching spree in the Wired offices that would make Elfen Lied look like a Disney toon? Or is this “irony”?’

Apologies for sounding like a disgruntled middle-class woman griping over semantics, but surely other people are as irked by this as I am?