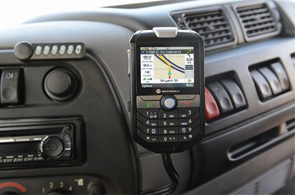 Obviously Motorola hasn’t quite grasped that when your company is struggling as much as they are, the worst thing you could possibly announce is that you’re going back to manufacturing 1992’s technology.

Hoping to remind the world they were once market leaders, and indeed invented the ruddy mobile phone, they’re releasing the Smart Rider Car Phone, a slinky Bluetooth-enabled BlackBerry-shaped phone with a 2.8″ display and GPS navigation. Perhaps they should’ve called the Smart Rider a sat-nav with phone capabilities, I wonder? It’s launching in June, around the world.

Related posts: Motorola sheds half its staff | Motorola begs for someone to buy them