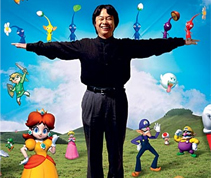 Time has put their annual top 100 Most Influential People poll online, with readers asked to vote on over 200 finalists.

As expected, the likes of Barack Obama, the Dalai Lama and…George Clooney all feature, but many tech maestros are featured predominantly too. It’s tough choosing between Microsoft lads Paul Allen, Steve Ballmer and Bill Gates, but what about Steve Jobs or Michael Dell?

Those successful in the gaming industry are also included in the poll, with Shigeru Miyamoto from Nintendo, and Alex Rigopulos and Eran Egozy, who created the Guitar Hero and Rock Band franchises.

Tough call, but currently of the aforementioned, Miyamoto is in at number three, and Bill Gates is just behind, at number four.