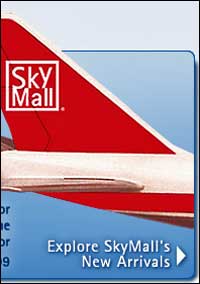 Anyone who loves gadgets and lives in the UK will know of the Innovations catalogue. Sadly it no longer exists, it went out of business a couple of years ago, but it was often found dropping through your letterbox inside the Sunday newspapers.

And what you’d find within its pages were some of the most weird and wonderful gizmos in the world. All the stuff you never really needed (ever) but bought from your hard-earned cash just in case – and because it looked “interesting”. I wasted a fortune back in the days of Innovations and was horrified when it bit the dust.

So imagine my joy last week when I caught an internal flight from Orlando to Miami in the States on American Airlines and found a copy of the SKY MALL catalogue in the pocket in front of my seat. It’s Innovations US-style and I’ve picked my five favourites over the jump. Best thing about it, even those in the UK can order from it! 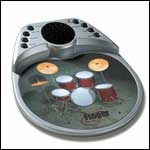 Computer mice are boring, let’s face it. It’d take a lot to make them interesting, wireless and Bluetooth just doesn’t do it for any of us, that’s just functional.

So why not shove your Microsoft or Logitech on this – it’s a mousemat, that’s also a set of drums. The buttons on it make the sound of eight different instruments from bass to snare to cymbals.

Just think of the sweet music you can make, and how much you can annoy the person sitting next to you in the office. It’ll turn you into Animal from The Muppets in no time. 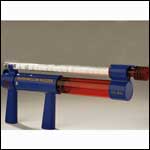 Who wants to mess around shooting water when you can fire sweet treats more than 30 feet.

This lets you blast out little marshmallows from the safety of your house to the neighbours across the road.

Costing $24.95, it even has an LED sight using a beam of red light. You can put 20 marshmallows in it each time, just enough for a quick snack, and there’s also a target included to give you some practice at accuracy.

But why bother with that. Just get your mate to stand at the end of the garden, open his/her mouth and get ready, aim and fire! 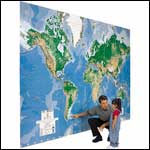 It doesn’t use batteries, and you can’t plug it into the mains but this thing is just the kind of useless gizmo I’d expect to see in a catalogue like this.

This chart of the globe is a massive NINE FOOT high by THIRTEEN FOOT long – think of the wallpaper you’d save and the paint you could leave in the tin if you decorated your wall with this instead.

It features all the countries, their capitals, major cities and time zones and the laminated surface can be written on too. I suspect there’s one hanging in many political Government offices around the world so they can mark-up where to invade next.

And if you don’t like geography, they also sell the World’s Largest Crossword which is 7ft by 7ft and costs $30 compared to the $150 for the map. Happy travels! 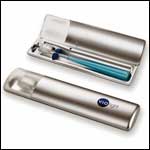 This comes under the “must-have” column for me. In fact, I’m gonna order one. When you travel a lot, there’s nothing worse than worrying about what bugs are on your toothbrush. And this says it takes those fears away.

Obviously, I don’t know whether it really kills a million germs, it’s worrying to think there’s even just 10 germs on my brush as I put it in my mouth.

But a little ultra-violet light inside the case will kill up to 99 per cent of them the makers say, including streptococcus and listeria. It takes seven minutes so I’m guessing it’s pretty thorough and the bulb will work for 2,000 hours of use. 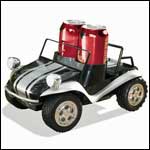 A replica of a dune buggy, this little RC motor comes with room to carry two cans or bottles of your favourite tipple. Unfortunately, it can’t open the fridge for you, so I’m not sure how you get round that problem when you’re lounging on the couch.

But, it’s still cool and quirky and there’s always room for a silly remote-control gizmo in all our lives. It needs four AA batteries but does all the usual twisting and turning moves for the $49.95 price.

I think they need to bring out an up-dated version though, with built-in bottle opener under the bonnet!