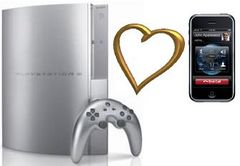 In a bizarre concoction, it turns out that the iPhone and the PlayStation 3 may soon be able to converse with and control one another, thanks to a new application from Netblender.

At its most basic level, the iPhone will be able to remote control Blu-ray disc playback on the PS3, but Denny Breitenfeld, Netblender’s CTO, says that it’s much more than that.

The iPhone and PS3 will be able to communicate with each other, allowing video, audio, text, and player commands to be sent back and forth. “So right now it seems everyone likes the “remote control” idea. However the player can control the iPhone as well,” he said.

Future functionality could include the iPhone displaying Internet Movie Database information about a film that’s playing, or allowing it to track your film collection and viewing habits.

How many people own an iPhone and a PS3 and would be interested in this, particularly as some features would presumably have to be developed by the movie studios and included on the Blu-ray Disc or as an Internet download, is another issue.