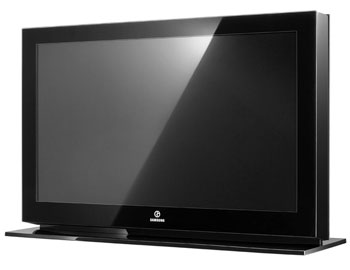 After producing a phone together, Samsung and Armani now have a TV on the market – the imaginatively titled Armani/Samsung LCD Television.

The design has been ‘ inspired by Giorgio Armani’s new 2008/09 Armani/Casa home furnishings collection’ (if you happen to be familiar with that) and features ‘a stylish remote control’, as well as ‘a special 4-mode lighted power switch that customizes the display of the two companies’ logos on the front of the television.”

But more practically, it has 100Hz full HD, HDMI connectivity and is available as a 46-inch (launching mid-summer) and 52-inch (late summer launch). No prices as yet, but expect to pay a premium.