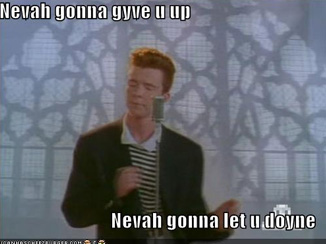 He promised not to take advantage of his recent ‘fame’, but Rick Astley has certainly ‘let us down’, by capitalising on the Rickrolling phenomenon and gone and created his own YouTube channel. Ok, he joined in October 2007, but has recently jazzed it up, with revenue-making adverts.

Instead of using the couple hundred versions of his 1987 single ‘Never Gonna Give You Up’ on the video-sharing site, users are now encouraged by Astley to help him out financially, and use his uploaded video instead. He’s gaining revenue by advertising his latest album (‘Ultimate Collection’, natch) on iTunes, which I’m sure at least 17 people will click on and buy, once finished rickrolling some unfortunate friend.

(via Inside Online Video)