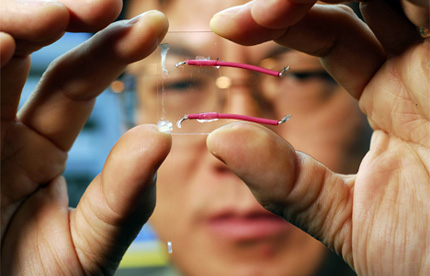 The 80s are back or at least that’s what I thought when I heard that the future was all about power dressing.

Un/fortunately, Professor Zhong Lin Wang of Georgia Tech is not talking about shoulder pads and trouser suits but instead has harnessed the power of nanowires to come up with materials that can convert kinetic energy into electrical current.

The professor’s main idea is to make clothing woven from these fibres that would allow your body’s natural motion to power any electrical device you may be carrying.

His idea is for a shirt but there’s no reason why it would have to be the human body’s movement. Campers could harness electrical energy by the motion of the wind blowing on their tents or by trailing a kite made of these fibres. Mind-blowing stuff.

The nanowires work on the piezoelectric effect which describes a property whereby materials create electric potential under physical stress. So far, Zhong Lin Wang has measured four millivolts from a 1cm fibre but he predicts that a metre square of such fabric could generate up to 80 milliwatts of power.

This is a seriously important breakthrough but I can’t help chuckling because 80 milliwatts isn’t much to get excited about. How much of this stuff would you have to swathe yourself in just to be able to make a cup of tea?

Assuming efficiency increases though, the possibilities of this technology are incredible. The only draw back is that Zinc Oxide, which the fibres are made from, is ruined when wet and that’s a bit of a problem not only in the washing machine but also if you happen to be walking around in the rain. Would you fancy wearing an electrically charged shirt in a downpour?