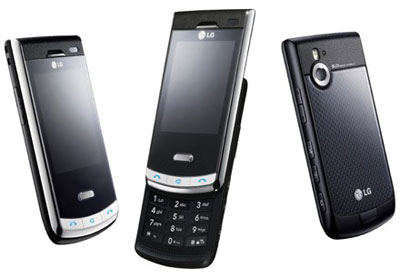 After months of secrecy, we finally have confirmation about the new LG Black Label series handset, and whaddya know, it’s called ‘Secret’, or the KF750 to you and I.

Believe it or not, this handset wasn’t exactly secret, as we first heard of the KF750 back in March, along with the specs! Still, it’s bound to follow the success of other Black Label series phones, the Chocolate and Shine, with the HSDPA enabled handset having a carbon fibre profile of just 11.8mm, a camera with 5.0-megapixel sensor, and can take video at 120fps, with DivX certified recording. In addition to this, you can edit photos and videos with the Movie Maker software, including facial editing and SmartLight technology, which adjusts the light settings.

100MB of internal memory is the only storage capacity given, however the microSD slot will allow up to 4GB of storage, handy for the MP3 player which supports MP3, AAC, AAC+, AAC++, WMA, and RA codecs.

Getting onto the now-standard touch settings, it has a 2.4″ TFT LCD touchscreen, plus touch-sensitive navigation buttons lit with a blue light. Five multimedia functions, including music, photos, games, documents and FM radio are offered on the screen.

Integrated in the ‘Secret’ phone is a Google package allowing for easy access to the internet, Gmail, Google Maps, and viewing YouTube videos, plus Microsoft flie formats (TXT, PDF, DOC, PPT, XLS) can be opened, when sent via email.