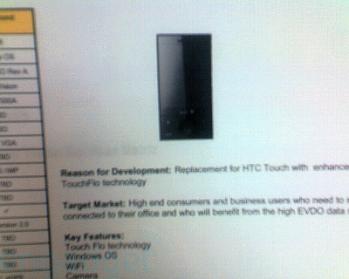 Next Tuesday HTC is holding a London press conference where attendees can ‘witness the next wave of HTC innovation’.

HTC is already down in the books as being a member of the Open Handset Alliance schemewith Google, and will be releasing an Android handset later this year apparently, however it’s looking likely next Tuesday will usher in the Diamond model, a 2.8″ touchscreen HSDPA mobile, the first of the HTC clan to run on Windows Mobile 6.1.

How do we know all of this? Thanks to HTC’s Financial Executive Cheng Hui-ming, who spoke to the Taipei Times and actually named the handset as being “the most important product for HTC this year”. Whether that’s a slip of the tongue, or HTC won’t be releasing their Android offering this year after all, remains to be seen.

Also confirmed are some of the internal specs, including WiFi, GPS, Bluetooth, 4GB of internal memory plus an impressive (for a smartphone) 3.2-megapixel camera. As you can see from the blurry pixellated image above that was leaked to Engadget, gone are the curves of the Touch mobile, in place is a seriously impressive screen, and omitted QWERTY keyboard.

(via Taipei Times and image via Engadget)