Well, well, well, look who’s come crawling back after being completely blown out of the water by Facebook, Bebo and any other social networking website without the gall to charge its users, like some sort of nostalgia vampires. Yes, that’s right. Friends Reunited is back.

The relaunched website is basically a standard Facebook rip off with a profile page cocktail, including of the best bits of Twitter, Weemee and maintaining its own old school selling point tucked away in the bottom-left corner.

The angle that they are pushing hardest is that of digital lifestyle aggregation – a focus on uploading and organising digital media to create a picture of the user’s life through photos, videos and any other media placed in albums or arranged into timelines to give a physical journey of someone’s life.

Friends Reunited is by no means the first to come up with this format. No, their pioneering days are over but they have marched in on competition in the form of other digital aggregation specialist sites like Rememble and the still in beta Miomi, both of which look far more interesting and better designed.

Where Friends Reunited has the edge is its registered user list and their name. You’ll never catch anyone under 50 bothering with it but to the elderly and the internet-fearful, Friends Reunited is safe. It even has “safe” in nice, easy to read, big letters next to their applications, one of which is bingo. Need I say any more? 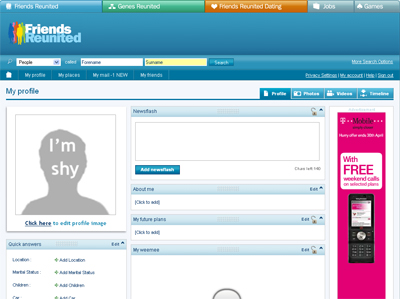 Personally, I feel it’s an absolute cheek to come back all smiles saying, “Look, it’s free” when they were rinsing the public for years. The trouble is they stand a good chance of success with so much Facebook fear amongst pensioners.

So, if you feel as I do, my advice to you is this: if you see a parent or grandparent even clicking on the link in the e-mail – that no doubt they’ll have already received – explain about all the other much better options out there, explain that Friends Reunited is evil and explain that if you catch them at it again, you’ll have them down the old people’s home with full power of attorney faster than they can say “zimmer frame”.