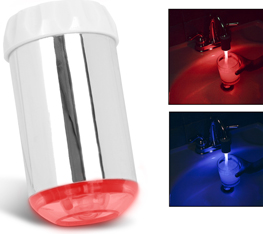 There’s a strange obsession here at Tech Digest, for taps with coloured LED lights. Yes, I don’t understand it either, but at least the diehard faucet fanboys can now rejoice that the UK market has not been left out of the lucrative affordable-coloured-taps world.

The above contraption turns your stream of water into a coloured ‘waterfall’ according to retailer I Want One Of Those, and due to the inbuilt temperature sensor, it changes between red and blue depending on whether your kids are wasting hot or cold water that hour.

I Want One Of Those glow flow tap

Related posts
Colour-changing tap light turns red when 30°C
LED Faucet Lights – bright coloured light from your taps
Artificial flavours? What is this, 2001? Not according to the PUR flavoured faucet