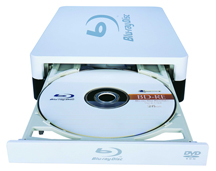 A new Blu-ray optical drive has been announced from Philips and Lite-On Digital Solutions, the excitingly-named DX-401S.

Launching in April, the read-only disc drive can read all DVD+/-R(W), CD-R(W) and Blu-ray discs, with single layer speeds being up to 32x and double layer up to 8x.

Expect it to be on UK shelves in the second half of 2008, with pricing as yet unconfirmed.