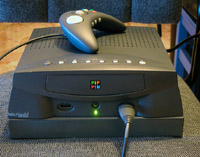 The latest HOT APPLE RUMOUR in the blog-o-verse is that the fashionable computer giant might be planning to enter the gaming world to compete with Sony, Microsoft and Nintendo.

Patents would appear to show that Apple might be about to up its gaming offering, perhaps even launching a separate standalone home games machine or handheld – rather than just shovelling a few Tetris clones onto iPhone.

Only Apple did this before, with a console you’ve almost certainly never heard of called the Pippin, a wannabe multimedia “hub” it intended to be the next big thing in simplified home gaming.

Now, Apple was obviously a very different company back when Pippin just about managed to come out in America and Japan in the mid-90s. It was niche, hardcore, obscure and didn’t have anything like the mainstream recognition and kudos it has today thanks to its various ‘Pods.

You’d think an Apple games machine would have the chance to be huge right now – but Apple has a strange habit of not putting its heart into certain products it doesn’t deem “core” enough. Like Apple TV. A good idea, sent out to die.

It seems the whole world is telling Apple it needs to make a games machine right now, so, rather grudgingly, it’s gone and registered a bunch of patents just in case it decides to half-heartedly enter the gaming arena at some point in the future.

It wouldn’t work, no matter how hard Apple tries.

Nintendo’s DS is dominating the portable gaming scene, and Sony’s PSP has the multimedia portable side (ie, the movie piracy area) tied up as well. The in-home world is a Microsoft/Sony/Nintendo bloodbath of pain and financial misery for all involved, while casual games are taken care of by the dumb offerings churned out for our mobile phones. And Facebook plug-ins.

So what’s left for Apple to take? Nothing. If it was to launch a standalone games machine, Apple would be flattened by the pros in a matter of months, currently fashionable brand status or not.

It’s current route is clearly the best – sticking a few niche games on iPhone and iPod and treating this as a pleasant little bonus revenue stream, rather than going into the vastly expensive and fiercely competitive world of gaming, where it’d surely suffer a slow death at the experienced hands of the competition.

A sleek Apple handheld gaming machine is a fantasy product we’d clearly all love to own and play with, but Apple isn’t Nintendo. It’s not even Sony. It would have nothing new to offer to gamers, except the chance to shovel yet more money Apple’s way via iTunes for more remakes of Sudoku and Frogger.

Save yourself the effort and a few billion dollars and stick to the MP3 players and fancy computers for the artistic types, Apple.

Related posts
Looking for a job and new iPhone? Move to Germany or Switzerland and work for Apple!
Nike and Apple offer tunes to get you running with 30-minute jogging workout
CONFIRMED: Apple launches 16GB iPhone and 32GB iPod Touch

One thought on “OPINION: Apple returning to the Bad Days? Why an Apple games console would be a disaster”