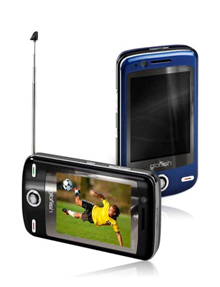 Two new handsets from PDA maker E-TEN, the Glofiish M810 and V900, pocket PC phones with an eye on entertainment.

The Glofiish V900 is E-TEN’s first Pocket PC Phone to feature mobile TV, with support for DVB-H, DVB-T, TDMB and DAB broadcasting standards. There’s also a VGA display, HSDPA, GSM, Wi-Fi, Bluetooth and GPS connectivity and a ‘touch-based user interface’. The V900 is scheduled to launch in the second half of the year.

The Glofiish M810 is a HSDPA, Wi-Fi and GPS-ready handset, featuring a full QWERTY keyboard, 2-megapixel auto-focus camera and built-in JAVA support. No shelf date as yet.