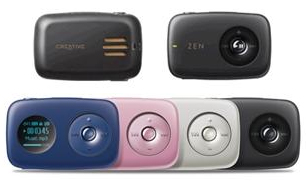 We’ve known of this update for a few months now, so it’s refreshing to be able to write the words “THEY’LL BE AVAILABLE FROM MARCH THE 1ST”. That should sate the Creative fanboys’ appetites for a few more weeks, methinks.

As you know, the colourful range will now feature inbuilt speakers so you can annoy everyone within proximity with your incessant death metal. Actually, come to think of it, owners of these Zen Stones will probably be listening to Justin Timberlake, but I’d like to think someone out there is cranking up the Rob Zombie.