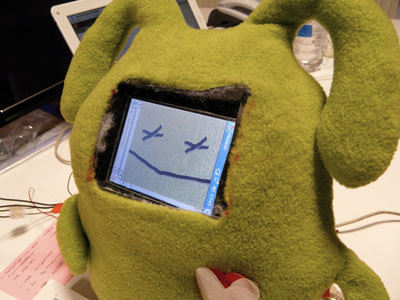 How do you increase interest in a DAB radio? Easy – throw in an early 90s fan and an strange-looking soft toy to create the DABagotchi.

Actually, it’s not real. Well, it is, but only as part of a BBC hardware hacking workshop. Yes, you read that right. The aim was to “build something that accompanies a radio, and allows the listener to rate the current track playing. But it should require some effort to rate, thus increasing the listener’s engagement with the process”.

So after a morning of brainstorming and playing with various bits and pieces from a local Maplins, the DABagotchi was born. Essentially it’s a DAB radio with an ability to rate music by a squeeze of the ‘hand’ – and those ratings power the ‘health’ of your DABagotchi (if you don’t rate, it dies). If the listener does rate a track then this data is sent to a webserver where it is compared to their previous ratings and other peoples’ ratings, causing the DABagotchi to express appropriate emotions (surprise, confusion, anger…) on its face.

For a workshop project, it doesn’t seem like bad work. But would you really want the life of a soft toy being dependent on listening to the BBC for 24 hours a day?