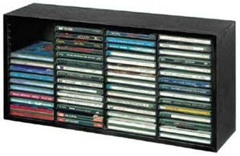 It’s true that sales of CD albums declined, dropping 10% in the last year, but the survey does suggest that people still prefer the shiny physical format.

The survey didn’t go into the reasons why people like CDs, but it’s easy to speculate. It could be because the audio quality is still generally better than digital downloads (and yes, I know that vinyl is better still, but let’s not get into that debate).

People may be wary of entrusting their music collection to their hard drive. A complete CD collection is less likely to be destroyed or stop working, whereas computers fail. Given people’s laziness, it’s unlikely that many people are enjoying the irony of backing up their downloads to disc.

Albums on CD still come with decent covers (yes, again, I realise that LPs are bigger and look better), notes, and lyrics. Not impossible to replicate online, but tedious at best.

And, despite Cover Flow, Apple TV, and similar ways of showing off your digital collection of music, it’s still far easier for your mates to laugh at your CD rack stuffed full of embarrassing music than it is to virtually flick through your iTunes albums (half of which don’t even have cover art).