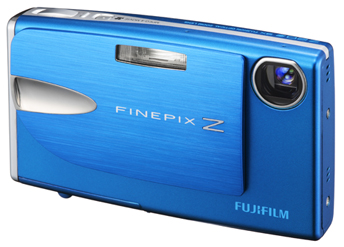 I’ve voiced my adoration of FujiFilm FinePix’s Z-series many times before, and am thrilled to bits they’ve added a new line to the range, with their new 10-megapixel Z20fd hitting shelves in March.

The new model includes MPEG-4 video technology, plus a Fujinon 3x optical zoom lens, and surprisingly, 45MB of internal memory. Certainly better than the usual 16MB or so you normally get in cameras!

As you’d expect from such a fun range from Fujifilm, the Z20fd comes in five colours, with the extremely bright Ice Blue, Panther Black, Tropical Green, Champagne Pink and Diablo Red offering a wide palette of primary colours.

Pricing for the UK market hasn’t been confirmed yet, however the US customers can expect to pay $199.95.