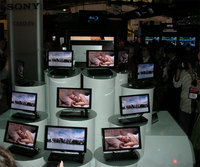 Sony has made a major leap forward in TV technology and has managed to come up with a TV that is actually cute. The XEL-1 Organic Light Emitting Diode TV is the first of its kind to land in the shops in the US (probably Europe too) and offers an 11” screen with a depth of just 3mm.

On top of that, you can understand why companies are seeing the potential in OLED as a successor to LCD; these tiny screens offer a contrast ratio of 1,000,000:1 (that is NOT a typo), which, as you can imagine, produces a pretty stunning picture – albeit one that would probably of most use mounted in the dashboard of a car.

Sir Howard Stringer himself was up on stage to announce the XEL-1 and, proving that Sony really does know a thing or two about selling expensive technology, revealed that these are not only on sale now in US Sony Style stores, but that the one in the nearby Caesars Palace mall has got stock waiting to be peddled off to all he eager early adopters currently filling Las Vegas.