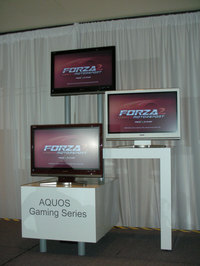 At last year’s CES, there were a few companies mentioning a shy interest in the potentially lucrative, but seemingly evasive, gamer market. However, apart from apparently being designed for gamers, most of these TVs offered precious little to make a gamer think that a set like that would actually make any difference to their gaming experience. This year though, Sharp has gone a little bit further. It’s not just rushing out the words, going bright red and running off to hide behind it’s friends; this time it’s actually got some goods on show.

The GP3 series of LCDs have introduced a couple of extre features in the equation. The new GP3s are each 32” LCD, but still manage to support 1080p resolution pictures and has a new system excitingly named the ‘Vyper [sic] Drive’ which apparently “reduces the lag time between game console input and the TV display”. See how it managed to slip the word ‘lag’ in there? That’ll totally appeal to all the uber-l33t gamers out there.

It comes in a bunch of exciting clours too – including black (for Sony fanboys), white (for Xbox fanboys) and ‘dark red wine’ (for, err, gaming booze-hounds I guess).

Each of the three sets in now available to buy in the US. The recommended retail price is set at $1,599.99, which strikes me as at tad expensive seeing as you could ditch the Vyper Drive and get a far more tangible 5” of extra screen diameter for the same price. And that’s just from looking at Sharp’s other HDTV prices.