None of our CES field reporters have done anything on this yet. Odd, seeing how staggering cool it looks. It’s iRiver’s silver SPINN media player, which handles MP3 tunes, MP4 movies, has an FM tuner, a 3.2″ LCD, does Bluetooth 2.0 with ease, has a microphone and up to 16GB of flash memory and so on – all the sort of stuff you’d expect from a modern electric thing that fits inside the pocket of even your tightest trousers.

BUT! iRiver’s newest media matchbox has a clever little gimmick. An analogue knob. That twiddly bit on the right there. This makes it easier for people to find and play stuff, apparently, with iRiver touting this as its “Extremely Intuitive User Interface.” 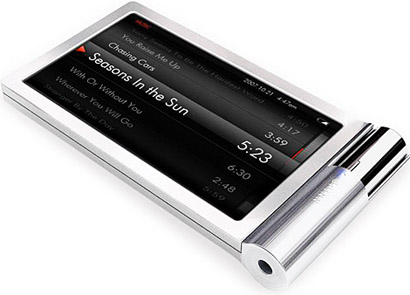 It’s the iPod’s wheel, only vertical and in 3D, pretty much, or a little twist on the Blackberry’s awesome little menu-scroller. The SPINN will come in 4, 8 and 16GB versions, and I’ll go out on a limb here and say it’s the best-looking PMP to come out of CES so far.

I can actually imagine being bothered to buy one, then boring everyone by insisting they look at it and all its features while making appreciative noises.