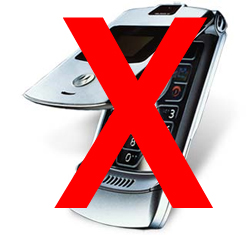 What? Surely there’s mileage in making another 17 versions of the RAZR before that happens?! But yes, Nomura International analyst Richard Windsor has written a research note saying that Motorola may exit the handset market in favour of becoming an “enterprise and government company”.

Windsor says there’s speculation that Chinese handset makers may buy Moto’s mobile division, although he reckons such a deal is unlikely. Of course, one analyst’s admittedly informed opinion doesn’t mean Motorola execs are hitting the eject button right now. However, it’s a sign of the company’s troubled fortunes, despite the impressive sales of its flagship RAZR models – particularly in the US.

It’s good news for the company’s rivals though: Nokia, Samsung, LG and Sony Ericsson will hope to gain market share if Moto’s handset division is sold off. Presumably, there’ll be an official Motorola denial any minute now. If there isn’t, the speculation will only mount.