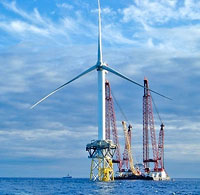 This is according to a man called John Hutton, who is calling for us lot to get our act together and install 7000 offshore wind turbines to take the lead in generating free electric out of the very air we breathe.

Hutton is the business secretary of the government. You wouldn’t think a secretary would be allowed to send out press releases about forward-thinking energy plans, but he has.

Hutton points out that the pushy old EU is expecting all European countries to generate 20% of their power using renewable sources by 2020, so this tallies in nicely – and those 7000 offshore turbines would produce enough energy to power all our TVs, kettles and LCD TVs. But you might have to turn off your Xbox 360 off in the winter months.

Apparently we are already nearly winners at all this green power business – next year the UK will overtake Denmark as the country that generates the most power from offshore wind sources. Although this renewable stuff only contributes 2% to our total energy supply.

We hope you have enjoyed this factual update about energy production! This blog isn’t only about new kinds of phone, you know!