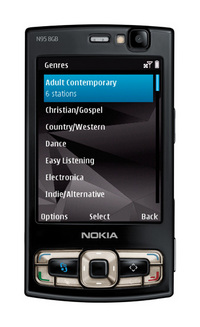 It works on Nokia phones running the Series 60 operating system, and can be downloaded from the official site, while it’ll be embedded in upcoming Nokia handsets. You’ll be able to search for stations by name, genre, country or language, with an additional chart of the ten most popular stations too.

You’ll be able to bookmark your favourites, and tweak the sound quality according to your connection (e.g. 3G versus Wi-Fi). Initially, the service will work on the N82, N91, N95 and N95 8GB, with more following shortly. I wonder what it means for Nokia’s existing Visual Radio technology though.

Stand by for more Nokia news in the next couple of days – I’m posting this from the airport en-route to Nokia World, the company’s annual showcase for new technologies and services.

One thought on “Nokia launches Nokia Internet Radio, streaming to your phone”